The announcement by CCHQ , HM Treasury amongst other govt departments that for the first time ever a leaflet was going with Tax Summaries for income tax payers seemed rather suspicious when :

Certain universal taxes duties and charges creating govt income from the UK population were not included .

It is based around Income Tax.

The summary of spending is only to be given to income tax payers receiving summaries.

There are many media examples of this shameful rhetoric.

Theres a backflow from Welfare payments through VAT and other charges, which would if being fair, significantly reduce effect of welfare on income tax payers when considering net spending impact .

Oh MP expenses and Salaries come from tax revenue? Why is no percentage given for that? Is that because theres a HUGE payrise due?

The slant to this leaflet disturbs me as continuance of negative rhetoric, and also if:

Theres approximately 60 million in this country and only 24 million leaflets... does that make it seem like party propoganda based on distorted message and delivered by a nudge psychology method?

AND if it is Party Messaging shouldnt CCHQ pay for it and not as assumed so far the HMRC/ Treasury ? 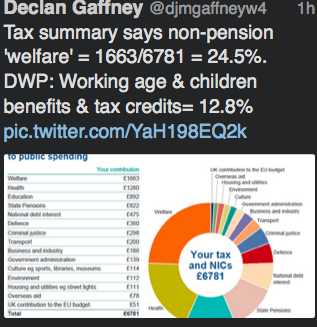 Ah but there is an election coming...

What message would you want to put in a fortune cookie?